Today was my buddy Bob's day to drive. We had invited our friend Ken 'Turk' no, that one to go to the range with us. My poor P-07 is sitting in KCK right now with a case of stickymagazinitus and a touch of lostspringus, and shooting the Rami so much puts a lot of wear on my eventual carry piece. I did take the Ruger 10/22 and my new (to me) Remington 870 Wingmaster Riot gun. I put Winchester target loads through it and what a blast that was. 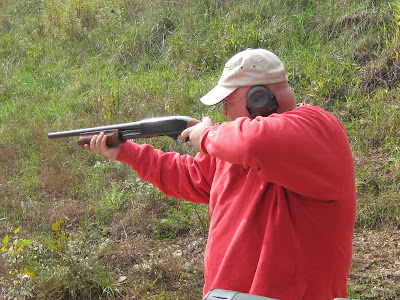 Bob brought out his new to him SKS. For $200, he found a steal of one. Bob loves to strip down the wood stock to bare wood and then rub linseed oil into them. I saw what the previous owner of the gun called his version of refinishing. All I can say is, Bob's work is far superior. He's also bought a couple of Mosin Nagants that have received the same treatment. 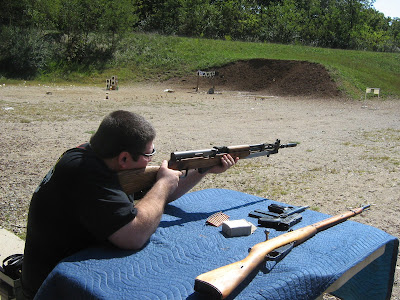 All I can say is, if you want a nice inexpensive 'assault weapon' that has minimum recoil and yet shoots a larger caliber, you can't go wrong with an SKS.

Our friend Turk busted the cherry on two of his guns. A snub nosed 856 Taurus and a PT709 Slim. 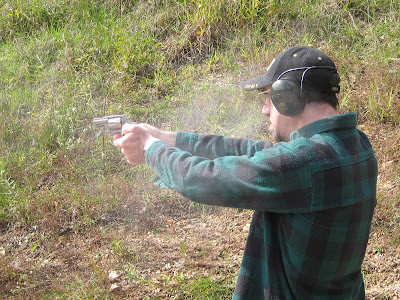 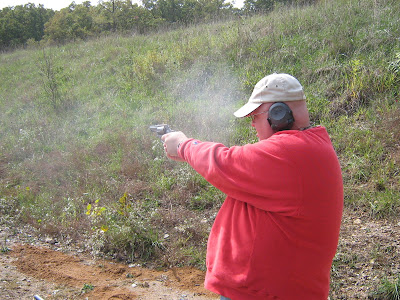 And that is your truly shooting the same gun. I didn't even attempt anything like accuracy with this gun. I just pointed it at the target and pulled the trigger. In double action, the break suprised me every time. Just like it should. 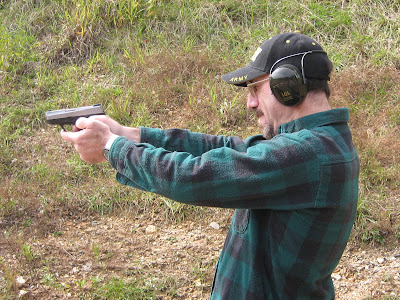 There is Turk again with his PT709 Slim. Turk bought it as a conceal carry piece before he bought the 856. Choices, my friend, you now have choices.

Turk also brought along his Beretta 92S. I had the opportunity to shoot it and it felt like a very solid gun. For the right price, I'd own one of these. We all own 10/22's with Turk finally finding a digicam version like the one I bought out from underneath him back on the Fourth of July weekend. You snooze, you loose there pal. I gave him the opportunity to shoot mine so when we finally decides to buy a box of Remington value pack (hint hint) he'll have a feel for his gun.

A very fun trip to the range. If you haven't been in a while or never, go find someone to take you. The best thing you can put on your guns is wear. Go out and produce some dirty bore patches after your trip to the range.
Posted by Top of the Chain at 10/11/2009 06:08:00 PM

Taupe of the Chain said...

TURK already has 1000 rounds of Federal bulk pack of .22LR. He did not want to decrease the value of the digicam 10/22 he bought by taking it out of the box.

He doesn't want to decrease its value? I will never understand buying guns and then not shooting them. Unless he's planning on selling it, what difference does it make anyway? Even then, how much "value" do 10/22s have? They're not exactly rare or uncommon.

Top of the Chain said...

Oh, I worked on shaming him into shooting it and the Mini at the bar last night.