It sure seems that way

50% are opposed to stricter control and 87% of Republicans, 52% OF Democrats, and 11% unaffiliated say cities  do not have a right to ban gun ownership.

71% say that Americans continue to believe that the Constition guarantees the right of an average citizen to own a gun.

Overall, America seems to be learning and understanding gun ownership is not some dark path to criminal intent.  On the contrary, with gun ownership on the rise, and crime rates holding steady, it could be concluded that same said ownership is a deterrent.
Posted by Top of the Chain at 11/30/2010 08:00:00 AM No comments:

Bill Whittle on What We Believe Part 7: American Exceptionalism

Having roughly 5% of world's population and yet, producing 24% of the world's GDP is extremely encouraging, given the regulatory climate that exists here. Were government to get out of the way of business and let it produce, I can see another 10% easy.

Into the Dustbin of History

Linoge asks the question of where the anti gunners are finding fresh anti gunners KKK members . Their one tarnished beacon of hope lies in Colin Goddard, the heir apparent to the Grand High Wizard of gun control

According to the recent Gallup Poll, the age groups 18 to 29 year olds and 30 to 49 year olds have dropped their support for gun control by 21 and 20 percent respectively since the year 2000. Also, those persons 64 years old plus show a 19 percent drop in support of gun control in the same time frame.

We are winning. The fight is not over, but the crap that anti gun organizations fling is drying up as the support for their ilk flakes away.
Posted by Top of the Chain at 11/28/2010 10:14:00 AM 1 comment:

No doubt you can tell I've been swingin' my HTML hammer and knocked out a couple walls, made some additions and repainted the place.

The blogroll has been simplified.  No more categorization for anyone. It was too much trouble trying to figure out where everyone should go.

I added links to a couple of podcasts I really enjoy.  Vicious Circle, it's just what it says it is.  Not for the faint of heart or the delicate of ear.  And B&B Guns, Breda and Bonnie do it right.  Make certain and give them a listen.

I also added a bunch of new people, so if you find yourself on here, thanks for publishing your thoughts and allowing me to link to them.  If you don't find yourself on my blogroll and wish to be added, please drop me a note and I'll add you. 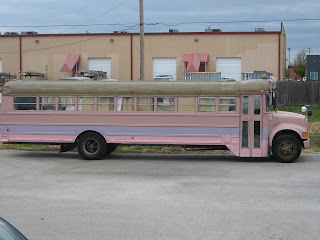 This was sitting out back of work when I came back from lunch yesterday.  My boss was not very pleased, and immediately called the police.  Apparently, my co worker talked to the driver and said it could sit there for up to 2 weeks.  My boss didn't think so.

In looking over this hippie bus, the paint job is brushed on and consists of a gold roof and three shades of pastel, I could forgive. But, in looking at the rear window, I found this. 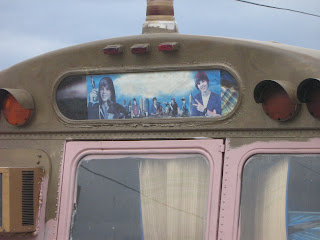 That's right, it's Justin Bieber.  That right there offends my sense of the aesthetic.  Something in 20 mm should do right nicely in removing the offensive collage, don't you think?
Posted by TotC at 11/24/2010 08:00:00 AM 2 comments:

If you believe in it hard enough, it won't necessarily come true

So there's some government study that claims one in five Americans suffer from mental illness. Well sure, I can believe it, when people believe the teleprompter in chief can piss scotch and fart rainbows, and then consistently fails to deliver. That is the clinical definition of crazy, expecting one outcome and receiving another.
Posted by TotC at 11/20/2010 08:28:00 AM 1 comment:

Mexico cries to the U.S. about it's crime and it's criminals appetite for guns

The article here claims that the U.S. has little incentive to stop drug cartels from legally purchasing guns in the states and smuggling them over the border.  But really, for someone to walk into a gun store and purchase a gun, they must submit a form 4473 and a background check is performed before the gun is allowed to leave the store.  Further, the purchaser, in submitting to the background check, has fore sworn that this is not a straw purchase.  So the statement that guns are being bought legally here and then smuggled over the border is a bit misleading. The guns are purchased here under a false pretense and smuggled into Mexico.

Of course, the ATF has problems tracing guns with the backlog at it's Martinsburg tracing center.  On average it took two weeks to complete a request from Mexico. Also, the ATF no longer releases an estimate of how many straw purchases  as it has become a political mess.  Seeing as how the ATF will no longer release any hard numbers,  the 90% of guns seized in Mexico can be traced back to the United States is even harder to believe.  In fact, the correction is that of those guns seized and submitted, a much smaller number than the total, 90% of them came from the U.S. As of December 2008, Mexican Attorney General Eduardo Medina Mora put the number of recovered crime weapons in the country over the past two years at nearly 29,000, according to USA Today.
Of those nearly 29,000 guns 7,743 were submitted in 2008 and 3,312 in 2007.

Americas appetite for narcotics is insatiable. So long as Mexican cartels have a black market to supply, their  wish to drive the competition out of business by violent means will prove equally rapacious.  However, the problem is not one of America's Second Amendment being to blame for Mexican violence, it is Mexico's ineffectiveness in controlling it's own criminal element.
Posted by TotC at 11/19/2010 09:00:00 AM 1 comment:

A person I know has a foot fetish.  As far as fetishes go, pretty tame, but still.  For those that know of it and know this person, we find it humorous.  Enter The Cleverly's, a bluegrass band that tickles my fancy.  The song is a dedication of sorts to those fortunate soles with just such a fetish.

Bill Whittle on What We Believe Part 6: Illegal Immigration

Bill Whittle on What We Believe Part 5: Gun Rights

Bill Whittle on What We Believe Part 4: Natural Law 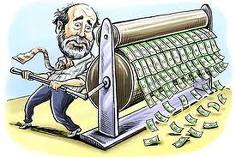 Labels: Chutzpah, things that make you go hmmmm?, What a pair

Since the Marine Corp had a birthday this last Wednesday, I thought this would make an appropriate Friday Fun Track.

Bill Whittle on What We Believe Part 3: Wealth Creation

On this day, we celebrate those men and women who have chosen to step up and defend our most cherished ideals.  Thank you very much for your service.
Posted by TotC at 11/11/2010 08:00:00 AM No comments:

Happy Birthday to the Marine Corp

On this day, in 1775, the Marine Corp came into being. Happy Birthday to Devil Dogs everywhere!

Bill Whittle on What We Believe, Part 2, The Problem with Elitism

Labels: delusions of grandeur, things that make you go hmmmm?

Bill Whittle, formerly of PJTV, has produced a series of video essays.  The man is truly eloquent.  Please share these and enjoy.

Why not with their bare hands?

Milton Friedman, whose name we honor tonight, was honored often for his recondite and subtle scholarship. But it was complemented by a sturdy common sense much in fashion nowhere now. About forty years ago he found himself in an Asian country where the government was extremely eager to show off a public works project which was inordinately and excessively fond – it was digging a canal. They took Milton out to see this, and he was astonished because there were hordes of workers, but no heavy earth moving equipment. And he remarked upon this to his government guide, and the man said "Mr. Friedman, you don't understand this is a jobs program. That's why we only have men with shovels.” To which Friedman said, "Well, if it's a jobs program why don't they have spoons instead of shovels?"

And why not with their bare hands? They could have put far more men to work with only their hands to carry the soil. Government does not, never has, and will not be a job creation machine. A shovel, why that takes away at least two jobs for someone else, maybe three if you hire someone to carry the soil away. Ah, but government does what it does to serve it's own self interest and that brings me to this quote by Thomas Sowell.

(Y)ou can't depend on the government because the government is not some brooding presence in the sky. The government is an organization with its own interest which it will serve over and above whatever interest it is supposedly being set up to serve. -- Thomas Sowell, interviewed at Right Wing News

An Open Letter to all the Senators and Congressmen elect

This is addressed to those people who your constituents deemed the most pallatable of two or more bad choices.

Second, and this is addressed to Senators exclusively. You are a choice I, nor any other voter should be making. Had I my druthers, you'd be appointed by your respective state houses and the 17th amendment would be repealed.

Third, for those politicians who have held multiple offices throughout a political career, you are the worst of them all. You somehow feel that when your colleague retires, his seat should become yours. Along with this, if you've held any office more than two terms, I will cast my next ballot to vote you out of that office.

Fourth, the next time you decide not to listen to the people, we might just decide to skip the ballot box and go straight for the jury box. As your peer Phil Hare found out, We The People do care about The Constitution and what it says and what the founders intended it to be. It does not live, it does not evolve. It is timeless and a foundation of bedrock that you damn well better use in deciding if that legislation you're supporting is consistent with it's content.

The tone of this letter has been deliberately belligerent. Why, you may ask. Because the gloves have come off. You don't deserve, nor have your earned our respect. You better work for it. 2012 is not that far off.

There's something we're all supposed to be doing today

I can't quite recall, it's important.  It's part of our civic duty.  Oh Yeah!!