I have been out of town over the weekend and did not have access to a real computer to post anything.   My father was of the greatest generation.  He grew up in western Kansas during the Great Depression.   When WW II came around, my father answered the call like so many other young men and women did of his age.  During WWII, my father served in the African and Pacific theaters.  While in the Pacific, the Japanese sank my father's destroyer.  He was one of the somewhat lucky ones,  only to have a second ship shot out from underneath him the very same day.  So many of my father's shipmates were not so lucky.

Less than ten years later, my father answered the call again, despite starting a family. This time, his brother was called to serve as well.  While not going through the horrors that he faced the first time, many of his contemparies did not survive.

So to all American servicemen and women who have paid the ultimate price, please remember them, not just on this day, but everyday.
Posted by TotC at 5/31/2010 07:30:00 PM 1 comment:

The story is here.

So those Marxists in Shanghai who've been trying to silence him now for so long are suddenly his idealogical brothers.  Right is left, left is right and lions are asking the lambs if they can climb into bed with them.
Posted by TotC at 5/21/2010 08:45:00 AM 2 comments: 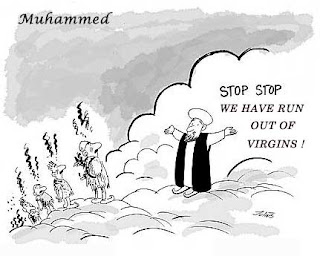 I found the above image here.

When I start firing necked rifle cases I'm gonna have to start doing this. By the way, those blue Maxwell house tubs make for great brass storage.
Posted by TotC at 5/10/2010 06:18:00 AM 5 comments:

How did I miss this?

Apparently it's Zombie Awareness Month. It is kind of hard to tell nowadays with all the Obamoids running around out there. Be careful, double tapping the undead is one thing, putting two in the kisser of someone still alive is murder.

The dis-honorable Furious Mike Bloomberg went to Washington D.C. to testify before the Senate committee for Homeland Security and Governmental Affairs. He took his Jack Booted Thug police commissioner Raymond Kelly along to say ZOMG!! Guns are bad we need to stop Cub Scouts from owning teh guns!

That's right, the arbitrary No Fly list that the A Security Theater folks can't even get right. By allowing a terror suspect to hop on that big ol' jet airliner, they want to, without due process ban you from buying a gun if your name matches someone on the list.

The following is the closing quote from Bloomberg's testimony:

Umm, yeah, your testimony is about the Second Amendment and violating it, "The right of the people to keep and bear arms SHALL NOT BE INFRINGED. But that's okay there mayor, go right ahead and keep pushing for you're tyrannical little dictatorship. Honest Americans who understand what that sacred document says are not going to let you get away with your dishonesty for long.

I urge you to take common sense steps to strengthen law enforcement – including closing the terror gap
– and to protect the American people from more attacks.

Terror gap, hmmm, gaps are like loopholes, and everyone knows how much Bloomberg and his group MAIG would like to see the non existent 'gun show loophole' closed. This sounds to me like he's changed the name to 'terror gap' to throw people off of the 'gun show loophole' theme he promotes. Perhaps he did it to fit the testimony before this committee.

Personally I want Bloomberg out there running around like Chicken Little screaming "The teabaggers terrorists have guns!" It makes it that much easier to counter his argument with sane logical thinking.

Labels: 2A, fakepolitik, What a pair

Seen on a t-shirt while I was out getting some custard.

"Run your car, not your mouth"

To expand upon that and go a whole other direction with it, I offer this gem;

"Run your life, not your mouth"

From Lyle at Ultimak via The View From North Central Idaho

Afterthought; We hear a lot of talk about integrity. "This is a man of great integrity.." and so on. OK, but how about principles? Integrity doesn't really tell the whole story, does it? Cannot one have integrity and still be wrong? Alright then, I want to see integrity and principles. Alright; integrity and American principles (of liberty). It's all I ask.

This brought on my thoughts on when politicians spew the word 'values.' Ugh, a politician can value your vote. He or she can value a campaign contribution. Principles are the bedrock upon which a human being builds their character. Principles are a binary set. Take for example, you are either honest or you're not. Now you can value honesty, but you can also value it's opposite if it advances your agenda. Lyle is correct,the principles of liberty is what a politician should espouse and back up with actions and deeds. Being a Missouri native, I've gotta alot of show me in my character. So Mr. Politician, Show Me that you're a principled individual. Otherwise, I'm gonna be your competition next time your seat comes up.
Posted by TotC at 5/02/2010 09:00:00 AM 1 comment: